If you have been to Tasmania and can imagine it full of British people with a history that went back to before the Vikings – you have The Isle of Man.

We really came here on a bit of a whim. We knew that Patricia’s forefathers emigrated to Australia from The Isle of Man, and I knew it from the Isle of Man TT Motorcycle races, but beyond that it was a bit of a mystery.

You can fly here, but as we have a car we chose to travel on The Steam Packet Ferry line from Heysham. The journey takes about 3 ½ hours and you must be in the carpark 45 minutes before it leaves to give adequate time for loading. Don’t desert your car and spend too long in the Wharf Café as you risk being paged over the PA as your car will be blocking everybody else. We are speaking from experience. The return journey for the car and two adult passengers was AU$485. We chose to sit outside on the deck rather than pay for a booked seat inside. It seemed a little stuffy in there. Our crossing was calm and dry, but the Irish Sea can get a little ugly at times, so you may be best to book a seat as insurance.

A few miles out to sea from Heysham are the most enormous fields of Wind Turbines. Hundreds of them just sitting in the ocean generating electricity with very little ongoing costs and no pollution. Australia is well behind in the renewable energy stakes from what we have seen from our British counterparts. We need to lift our game.

The unloading procedures in Douglas, the major port and city on the Isle of Man (IOM) went seamlessly and we were off within about 15 minutes of being asked to return to our vehicles. Our hotel was in the small port town of Port Erin, about 20 minutes’ drive from Douglas. The Falcon’s Nest stood on the hill overlooking the bay and whilst only a 2-Star Hotel it was really quite nice. We were given Room 1, which turned out to be a two-bedroom suite with antique furnishings. The picture window had a full view of the bay and the Full English breakfast each morning was a welcome addition.

The Isle of Man is tiny. To drive from one end to the other takes about an hour and the population is approximately 90,000. This swells significantly when the IOM TT Races are held in May each year and many traders make as much money from the motorcycle fans in the two weeks of the TT as they do from the remainder of the year. That is a blessing for the island as British tourism took a dive when cheap airfares to Spain became available in the 70s. In some ways time has stood still for the IOM, but that adds to the attraction of the place.

It is quiet, unrushed, uncrowded and so very scenic. The geography is diverse, and the northern end of the island is quite hilly with the coast full of little hidden coves and harbours. This part of the world has daily tides of around 3 metres so, depending on the time of day, boats moored in the harbours are either sitting on the muddy seabed or floating on crystal clear water. The waters are cold, 8 degrees whilst we were here, but that didn’t stop a large group of locals from swimming across the bay on Sunday morning. They are a hardy bunch.

There is lots to do and see here. We took the steam train from Port Erin to Douglas and it is a charming way to travel. It runs about 8 times a day and seemingly every child on the island turns out to wave as it passes by. Douglas, the capital, houses the Manx Museum and we spent some time there learning a little about the history of the IOM. They really value the influence the Vikings had on the governance of the island and some Viking traditions still exist today. They are part of the UK but have their own currency and maintain a degree of independence from the Parliament in Westminster.

Peel Castle was another stop for us and we enjoyed being inside a mediaeval castle again which had great views over the township of Peel and its active harbour.

Early in its history the Isle of Man was a major producer of lead and zinc. The mines here were a rich source of these metals and they produced more than the remainder of the British Isles. The Great Laxey Wheel, which is the largest working water wheel in the world, is worth a visit. There is a very pleasant Tearoom nearby to rest after walking the 99 steps to the top of the Wheel, then trekking further up the hill to enter the mine. We admired the grit of the miners who worked the seam. Their working conditions were horrendous, and we are sure that illness from dust took them to an early grave. The Laxey Wheel holds a special place in the history of the IOM and to this day Primary School children still learn a song which contains the following verse.

I have mentioned the Isle of Man TT races held here in May each year. This is a 60km per lap road course which is so challenging. It is also the most dangerous motorsport activity with 252 deaths recorded since the races commenced in 1911. In 2016 alone 5 riders were killed. It was with a little trepidation that Patricia and I took to the track on the top end of the island. One can only imagine the skill and bravado of the riders who can lap the course at an average speed of over 200kph. Our little Peugeot felt fast at 80kph.

The IOM Motor Museum is worth a visit if you are into motor sports and motor vehicles. I was particularly touched when I came across an old Buick (my father’s car) parked next to an Austin 7 (my uncle’s car) in the museum. It was a lovely coincidence.

Our ferry back to the mainland leaves at 8:45am tomorrow and we must be there at 8:00am to board. We should be packing our bags, so probably best to sign off now and we will write from the Lakes District in a few days’ time. 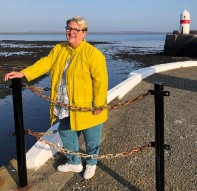 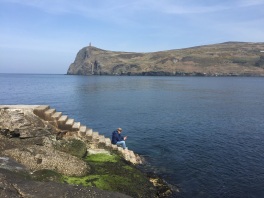